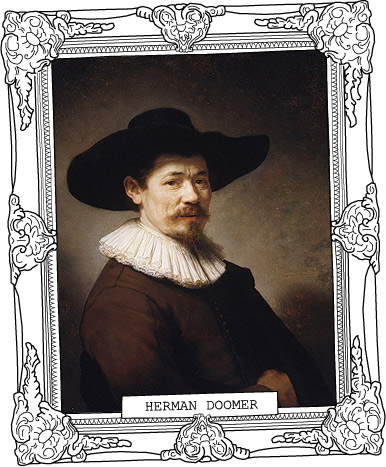 This building where Hotel IX is located was once the home and workshop of Herman Doomer, a furniture maker, ivory carver and frame maker from Germany. One of Herman Doomer’s clients was Rembrandt van Rijn. Rembrandt was a loyal customer who paid many visits to the workshop at Hartenstraat 8.

Along with his wife Baertje Martens he raised nine children, including the Golden Age landscape painter Lambert Doomer. After learning the skill of furniture making from his father, Lambert became a student of Rembrandt in 1640 and worked alongside the master in his studio. In that way he might have worked in one way or another on Rembrandt’s famous Night Watch.

Around 1640 Herman Doomer ordered two portraits, of his wife and himself, to be painted by Rembrandt. These are now located at the Metropolitan Museum of Art in New York and at the Hermitage in St. Petersburg. Several works of Doomer himself are in the permanent collection of the Rijksmuseum in Amsterdam.

From then until now 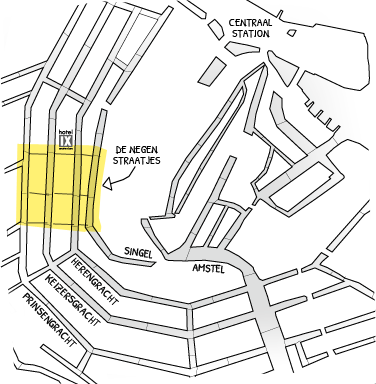 Much has changed throughout the years, but the heart of Amsterdam remains the same in many ways. Amsterdam is known for its famous canals. The 17th century canals in the center of the city — Singel, Herengracht, Keizersgracht, and Prinsengracht — are part of an area recognized by the UNESCO World Heritage List in 2010.

“The whole world is built around Amsterdam” according to the famous 17th century Dutch poet Joost van den Vondel. The period known as the Golden Age was an unprecedented time of wealth and prosperity for the Dutch people. Thousands of people from all over Europe came to Amsterdam to take advantage of the booming economy or to begin a new life. The city that began within those first famous canals was bursting at the seams. Amsterdam’s expansion occurred rapidly.

Streets and alleys were constructed from that original center, and in the second half of the 17th century the area of the 9 Streets was formed. Then as now, the district was dominated by commerce and culture.

Stay with us in the 9 streets